The Power of Pilates in Physical Rehabilitation: Ian’s Story

Throughout the history of Pilates-Sarasota, we’ve often talked about how Pilates can help during rehabbing an injury or even chronic illnesses. We’ve also detailed why Pilates is a wonderful choice in tandem with general rehab practices, as well as pre-habbing before surgery to ensure the best scenario possible after surgery. As a full-body practice, Pilates has proven itself to be instrumental for so many coming back from injuries, allowing them to not only improve the condition they wanted to focus on, but also the entire body’s well-being. Today we’d like to introduce you to one of our clients, Ian, whose comeback story is not only inspiring, but also a perfect example of what Pilates can do for anyone needing an assist after a traumatic injury.

Growing up in Illinois, Ian found himself drawn towards sports of all kinds as well as the outdoors, so one could say movement was central to who he was. From childhood through college and after, Ian could be found at the ready on the field, on the court, or in the rink for hockey, football, basketball, baseball, lacrosse and rugby, offering him not only a chance to move, but also providing a quality social outlet. Though it slowed a bit after college due to typical adulting barriers like a full-time trading job, starting a family, and moving to London, Ian found his athletic footing again once he moved to Crested Butte, CO. He immediately jumped into skiing, hiking, mountain biking, and snowboarding, as well as coaching his kid’s team sports. Ian quickly realized he could reconnect with all facets of movement through sports, which offered him not only a physical well-being, but also peace of mind.

In December of 2020, Ian was snowboarding on Snodgrass Mountain in Gunnison National Forest when an avalanche occurred. It carried him approximately 300 feet through trees and caused a severe leg injury, but luckily he and his partner were able to contact 911 and a rescue team was dispatched, airlifting him to safety. Full details of the accident can be found here.

Immediately following the accident, Ian had surgery to repair the injury and save the use of his leg. While this was successful in saving the leg, he required a second surgery due to nonunion of the tibia. Once this second surgery was successful, he was able to begin rehabilitation. This proved to be slow-going, as not only did he need to relearn how to use his leg, but he found that his entire body had been negatively affected in various ways due to compensating for the injury. He realized he needed more than just rehab on his leg: he needed to find the right path in mobilizing and regaining function of his entire body.

Knowing that elevation can affect physical rehabilitation, Ian headed to Florida and began searching for someone or something to get him not only in a better place physically, but also mentally, as the previous months had been draining. This is when he found Kathy at Dynamic Fitness – someone who has also dealt with injuries during her dance career and found Pilates to be a source of positive change, both physically and mentally. Kathy could relate to Ian and knew how effective Pilates was for her, so she set out on a program that would get Ian on the right track.

Starting in December of 2021, Ian began working with Kathy along with his general rehab program. She helped guide him through regaining strength, mobility, and flexibility, and basically retraining the body to function properly. After just 20 sessions with Kathy, Ian noticed a vast improvement of not only his physical self, but also emotionally and mentally: with everything that had happened, it had seemed to him that he might not get back to his old self. Now he had hope. Fast-forward another 20 sessions, and Ian is certain that Pilates was the right choice for him, as he has a new found confidence in himself that he was unsure he’d find during the darker months. Though still in recovery mode, he has experienced so much improvement that he knows it won’t be much longer until he’s back at 100%.

When talking with Ian, we asked what he would like others to know about his journey, and he offered the following:

“… (Pilates) would have been helpful even before the injury, just from wear and tear of daily life. Being able to move or reconnect to your own body is imperative for wellbeing and peace of mind, which is very important as we get older, so Pilates is great for anyone in any situation…”

And this anecdote was too good to not mention:

“I can’t say enough about Kathy – from her history with Pilates, her time invested in training and her passion for it, as well as maintaining a physicality connected to mind, body, and spirit. After the first meeting, I left almost in tears because I was so happy with what I felt was a potential path to success after over a year of feeling like things may never change.”

We are thrilled with Ian’s transformation and continued success; we can’t wait to hear what’s next for him and his family!

If you are interested in trying Pilates to help overcome an injury, contact Kathy at Dynamic Fitness via the webform below. We hope to see you soon in the studio! 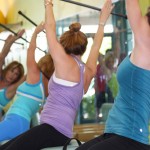 The Resilience of Pilates over the COVID-19 PandemicHealth