Love Is All Around: Kathy Remembers Romana Kryzanowska

It’s been almost eight months since the Pilates world, and the world at large, saw a brilliant light fade out in the passage of Romana Kryzanowska. She’s admired by Pilates instructors across the globe for her unwavering devotion to the Pilates method, which she studied under Joseph Pilates himself, becoming a champion of the fitness system after his death.

Over the course of decades, Romana taught countless clients; at the same time, she mentored and passed the classical Pilates legacy to hundreds of apprentices, many of whom have gone on to become the top Pilates instructors in the world. As the owner of Dynamic Fitness, Sarasota’s original Pilates studio, I feel incredibly blessed to be a member of a generation of Pilates instructors who trained and obtained our certification under Romana.

I clearly remember that day in 1996 when I first walked into Drago’s Gym, the studio where Romana worked tirelessly to preserve the authentic, classical Pilates method. One end of the studio was full of aspiring gymnasts and circus artists who shared the studio, flying around in the air on trapeze swings and parallel bars. The reformers and other equipment originally designed by Joe Pilates stood in the middle of the studio. Where I’d expected a solemn temple to the revered fitness method, I entered an atmosphere of controlled chaos and vibrant energy.

Romana was definitely the wellspring of that energy. An abundantly giving instructor, she was like a mother to the apprentices, pushing us hard to become the most competent, knowledgeable, and safety-minded teachers of the system she loved like life itself. Romana’s true love of the work and her connection to Joe Pilates was apparent in everything she did.

Romana was the embodiment of pure joie de vivre, and she taught us to play hard as well as work hard. When one of us made a big breakthrough, like performing our first teaser on the reformer, Romana would cry, “Caramba! Champagne!” And then the whole studio would toast a glass of sparkling wine.

Indeed, there was nothing clinical about the way Romana taught Pilates. Her imagery had nothing to do with anatomy, but more with movement. Romana was a ballerina by training, and it was like she danced with the people she taught. With her intuitive way about teaching and about people, Romana could look at a body in front of her and know the right thing to do with that person. She painted pictures with her cues and helped each student find his or her own way through an exercise.

Romana didn’t just teach the Pilates method, but she taught her great love for it as well. I believe that’s the reason why Pilates is so alive and strong today: Nobody else had the charisma to pass it to the next generation with so much passion. Nobody else could fuel it the way she did.

At her memorial service in New York, hundreds of Romana’s former students (now instructors) packed inside St. Patrick’s Cathedral, some traveling from as far away as Australia to celebrate Romana’s life and her memory. The last eulogist ended his commemoration with a question: “What did Romana always say?”

Every single person in the church responded instantly: “Love is all around!” we shouted. That was Romana’s mantra. You felt it when you were with her, and we certainly felt it at that moment. We are lucky — the ones who worked with her, she left a little bit of her spirit with us. I feel she speaks through me sometimes in certain teaching moments in the studio. It gives me great joy every day to pass on her powerful insight, her compassion for students, and her zeal for classical Pilates. 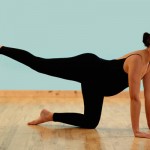 #LivingBetterWithPilates: Dynamic Fitness Invites You to Share Your Storyhealth