In the last article, we properly dispatched the misconception that the Pilates method is all about-and only about-flattening and sculpting the abdominals. Granted, Pilates emphasizes a strong core, and longtime practitioners of the method often possess some enviably flat stomachs. It’s a physical feature that both men and women seek through any diet and/or fitness regimen. That said, it seems that so many people entertain a certain notion about Pilates that forms the basis of this next myth.

Myth #2: Pilates is a women’s workout.

Teachers of Pilates continue to point out that the founder of the fitness system, Joseph Pilates, was a man, and some of the Elders (the very first generation of Pilates students, who went on to teach the technique as they learned it directly from the master) were also men. Nevertheless, today’s classes and client bases are dominated by females. Why is this? It’s a question that Pilates instructors grapple with a great deal. Perhaps it’s because Pilates doesn’t aim to help students “bulk up,” or build mass in the “vanity muscles” of the arms and chest. Maybe it’s because of the flowing and graceful character of the movements, or the way the method attracts professional dancers and expecting mothers. Whatever the reasoning, any perception that Pilates is “too girly” to work to a man’s benefit is simply and patently false.

Have you ever seen a picture of Joseph Pilates? (If not, just check out our About page.) Even at the age of 82, Joe sported a barrel chest and looked like he could pulverize a watermelon with his thighs. This was obviously a powerful man at the pinnacle of physical health for an adult male, to say nothing of being an octogenarian. In a recent article, we discussed the ways in which the Pilates method develops and strengthens muscles that are vital to the male physique, not just in performance, but in protection from injury as well. We’ve been seeing an encouraging influx of men in our studio lately, and we hope that’s a sign that this myth is being put to rest for good. 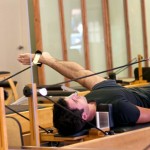 Pilates Mythbusters: Pilates Is for Wimpshealth